Fishpeople is a population of fishlike humanoid creatures that live in all Colony Locations. They are one of the faction types in the Clockwork Empires. Fishpeople have either blue, silver or green scales and are often armed with a weapon. The leader of a group of Fishpeople wears headgear.

Fishpeople are not aggressive from the outset. Instead a player will be given the Fishpeople discovery event at which point the player can either deny their existence, try to communicate with them or order them to be shot on sight. If good relationships are maintained with the Fishpeople, they will eventually start sending envoy parties bearing gifts such as a cube of flesh, a raw beetle steak, a bushel of bones, a bushel of sand and a bushel of scrap iron. Otherwise player interaction can turn them hostile in the future. An event may occur, where a fishperson butchers a colonists, which doesn't help keeping good relations. Colonists may ask the player to change their policy towards Fishpeople.

If Fishpeople are hostile towards the player, Fishpeople will also start raiding the colony, much in the way of bandits or foreign raiding parties.

Fishpeople can be butchered when dead by creating a "Butcher Fishperson" job on them. This will make an idle colonist butcher them to provide two raw fishperson steaks.

Additionally, your naturalists can dissect fishpeople organs for scientists to research for prestige points. 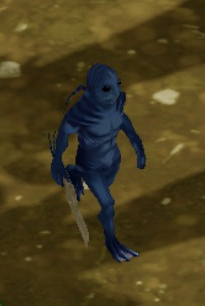 A blue fishperson wandering around with a Bone Knife.

Like colonists, fishpeople can also have a various traits. They also have names displayed.

If enough fishpeople are killed, they are angered and will send a wave of raiders to kill your colonists. These fishmen will all be armed.

Foraging Exotic Caviar from the water's edge will increase the intensity of the eventual raid. There is a higher chance of a raid on New Sogwood.